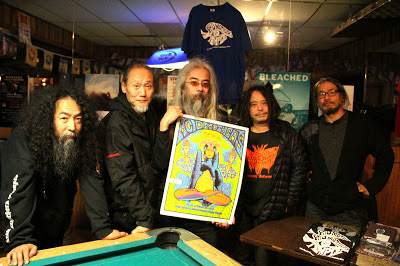 It wasn't my idea.  Friends in Milwaukee have hosted multiple versions of their "All Messed Up".  They told me to "contact the scribes" from Cleveland's "Lottery League".  The idea seemed simple enough : Rally together a shitload of local musicians, throw a party and put all of their names in a hat.  Draw random bands.  Further rules vary by province.  No trading members.  Play a cover.  If you drew a bunch of drummers, well, you'll have to deal with that.  You are in no way obligated to play the instrument you normally play.

In the end, nearly 100 said they were in.  A few weeks later, we had 72 names to draw.  17 bands were formed. I knew they weren't all going to make it.  Life happens.  Bands crumbled, understandably.  Some painful dropouts, like Dave Reminick from Paper Mice and Kevin from Mannequin Men.  Kyle from Cacaw.  Al Scorch was drawn with Magic Ian, and sadly, it didn't happen.  I expected this.

Those who wrote music were invited to play a multistage show at my favorite basement in the city.  9 bands performed.  The energy and vibe in the room was something I haven't seen in a long time, and something I have not seen since. It brought the community together.  Though logistically a mess, it ran extremely smooth.  Some of the footage is so shitty because I was running around trying to make sure everything was taken care of, all the while being fed shots of whiskey.

The spectacular Whitney Allen made one of my favorite flyers in existence.  Knowing all of these musicians and what they've done, I had an idea of what they may be capable of, and the challenges faced in doing this project.  It's what got me so excited.  Would it be a disaster?  Surely, it could have been, but I'm happy to report it wasn't.  The high point, for me, was watching Bill Satek (Mines), John Carroll (Paper Mice), and Andrew Martinec (Bad Drugs).  They were called "Alien Shit", and are 2nd to last in this video.  There were many who could and did pull off something different.  However, this....it sounded exactly how I'd hoped it would sound.  Bill laughed after they were done and yelled "It's our first show!"  You wouldn't have known.

The whole night was a testament to the burgeoning Chicago underground scene.  The talent and people. Treasure Town couldn't host it, which saddened me.  How could we cram so many people, so much gear, into a basement?  I reached out to my favorite place, and begged them to take it on.  They agreed, and it actually made the damn thing even better.  An upstairs and downstairs stage.  At the height of it all, I'd turn my camera off.  Looking around seeing everyone in the room packed together, smiling.  It was one of the best nights I can remember.  Missoula just hosted one, and shared the exact same experience.  You can do it, too, and you should.
Posted by Gonzo Chicago at 10:34 AM No comments: