Shiner.  Uttering the name can bring a sparkle to eyes of even the most jaded old music fan.  Often times, it's followed by a conversation about how they were the best band too few seemed to notice in their prime.  Their final two reunions shows were held in Chicago.  In a flurry of reunions as of late, this one stuck hard.  The most hard-to-impress folks I know were raving about it.  It really was something to behold.  I was lucky enough to be back-stage as they went on and finished night two.  I hugged a very sweaty Gerkin, caring not for myself getting drenched in the process, and told him it meant a lot to finally see them play those songs.  It really did.  Finish this joke for us : I haven't seen that many old dudes freaking out since...
Posted by Gonzo Chicago at 5:35 PM No comments:

Mannequin Men : The Farewell Show. from GONZO CHICAGO on Vimeo.

I'll spare you a mushy backstory and keep it simple.  Mannequin Men have been a Chicago staple for almost a decade.  They rounded up their favorite bands like Football and Outer Minds, both spectacular in their own right, to send bassist Miles Raymer off to NYC.  While I have a hard time believing this is the end of the band entirely, those who missed this probably won't be seeing anything soon.  A stellar send-off, and the closing of a chapter in Chicago music.  Enjoy!
Posted by Gonzo Chicago at 6:19 PM No comments:

Watch : Dope Body play a new song at the Dustbowl

Dope Body played "The Dustbowl" in Chicago.  It was so dark I turned on the video light for the first time in a year.   I guess this place is closing soon, too, so I've heard.  A shame.  Some really great shows in this place have gone down.  I don't know what's happening, but I'm convinced some good spots will fill the void left by Mortville, Ball Hall, and any others that inevitably come and go.  We're a resourceful bunch, and always have been.  A sweaty show that included Heavy Times, Nude Sunrise, and The Funs.

Heavy Times played a bunch of stuff they don't normally play.  It was a short set.  A little tense, but what's new?  How long until Heavy Times get inducted into the RNR Hall of Fame?  Jacker and crew are always fun.  Looking forward to that new 7".  The Funs actually ended closing this one up instead of playing second.  We put our stuff down and crowdsurfed....three times?  Shit got pretty gnarly for a weekday.  Those two are getting better and better.  A well oiled machine of fuzz.  So, enjoy this new song by Dope Body!  The video's dirty and hazy, just like our memories from this night.  Order Natural History while you're at it! 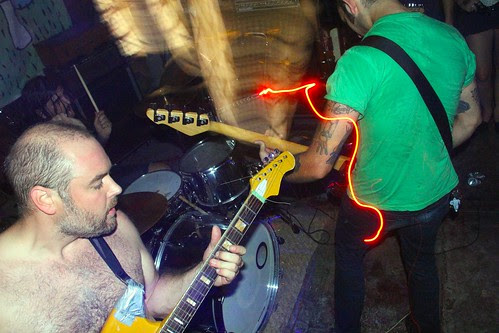 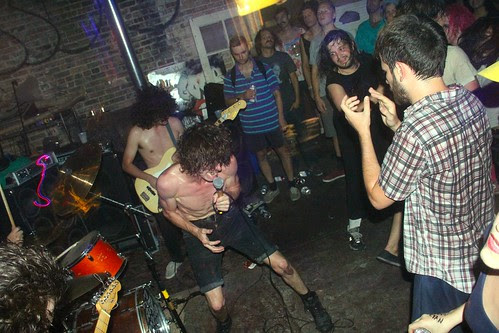 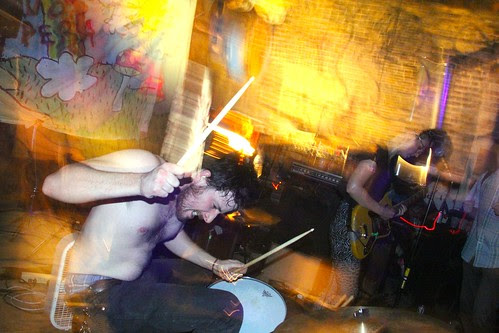 Posted by Gonzo Chicago at 2:00 PM No comments:

Divine Fits - "For Your Heart" Live - Schubas from GONZO CHICAGO on Vimeo.
"This is the first place I ever set foot in Chicago". Dan Boeckner recounting how all of his bands first shows were at the seasons venues small quarters. Divine Fits were no exception, kicking out the brand new record on their fourth show ever. Unsurprisingly, the show was great, and was opened by the wonderful Bare Mutants. Let's hope they stick around for a while.
Posted by Gonzo Chicago at 6:43 PM No comments:

Coffin Ships - "Hillary is an Animol +" from GONZO CHICAGO on Vimeo.

If you didn't notice, we're a huge sucker for pop hooks. Chicago has a great deal of newer two-pieces that you probably haven't heard of.  They're seemingly starting to creep out into their own little slice of internet (and real life) stardom.  One thing I love about most of the bands we post about here, is they could really give a shit less about the lot of that, they just want to play, make their own music, and have people appreciate it.

These bands, they've all been playing dirty basement to 20 people for months, or years. The Hecks, The Funs, and Coffin Ships. Not to be confused with the also excellent Coffin Pricks, the ol' Ships are a non-abrasive two piece who sing about dogs and fuzzy memories. They're great, and also just put a song out on the spectacular "Manic Static Compilation #1", alongside Heavy Times, Magic Ian, and The Funs. You should buy it. Try and catch these guys in a basement. Filmed at Roxaboxen, 2012.
manicstatic.bigcartel.com/product/ms-005-manic-static-mix-tapes-no-1-cs
coffinships.bandcamp.com/
Posted by Gonzo Chicago at 3:27 PM No comments: