It almost seemed refreshing that Guilty Pleasures chose the Burlington for their Chicago reunion show. They picked a dark, relatively new spot over, say, The Empty Bottle, a place where half of its members have worked and likely played or at least attended hundreds of shows.

Formed in 1997, they're often tagged as getting lost in the shuffle of a new era of garage rock. They recorded one record. It never came out, but now that's been rectified by Dusty Medical. Its members have since gone on to such notable projects such as The Ponys, Hot Machines, and Football.

Reunion shows can be a drag, but this was a solid, no-bullshit show for people who just wanted to see these guys, whether it be for the first or possibly the last time.

The excellent Timmy's Organism and Touched by Ghoul opened.

Buy the record!
Posted by Gonzo Chicago at 11:23 AM No comments:

Ahhh, Prince Rama. A two-piece this time around, the sisters of Brooklyn headed up a show with Piss Piss Piss Moan Moan Moan at Chicago's Subterranean. I was pretty drunk when I shot this. It's my birthday today. Yip! Enjoy. - jy
Posted by Gonzo Chicago at 7:13 PM No comments:

Just a quick note : We're excited to announce a partnership with Impose Magazine.

We believe Impose, based out of Brooklyn, shares our ideals. They cover many DIY spots, as well as normal venue based things, repping our gals and guys in Teen River, White Mystery, and all sorts of things.

They'll be featuring content of our choosing on their .TV site, as well as a few editorial articles here and there. We're excited to get good things out to a few more people. New year. New endeavors. There are some ridiculously exciting projects in the works, so as always, stay tuned.
Posted by Gonzo Chicago at 9:23 AM No comments:

Watch : Bomb Banks at the Dustbowl.

It's sort of like the chest-bursting scene in Alien, or David Bowie at his coolest. They can go from a slight coo, to sludgy noise-punk in seconds. Bomb Banks are set to punch you in the face in 2012. Sure, they'll kiss you afterwards, to set you at ease, but you'll forever be weary of a raised hand from there on out. A record is coming soon. No website yet. Just be aware.
Posted by Gonzo Chicago at 6:48 AM No comments:

With Cacaw now defunct, Zack Weil (Cacaw/Zath) and Kyle Reynolds (currently also in Bad Drugs) clearly wanted to keep the babies plugging their ears, so they grabbed Kevin from Unmanned Ship and formed Oozing Wound. This was only their second show, held at Crown Liquors on Milwaukee Avenue. Dig it.
Posted by Gonzo Chicago at 3:18 PM No comments:

Chicago's element of surprise never fails. This was the first show at the Secret Garden. The room can hold...uh...about 8 people. Hard to film, but all the more fun. Wishgift opened. ReDemer closed. We drank. We were merry. Someone's birthday party happened...and all was well with the world. Songs are "Pillow is Trash Talk" and "Amphibian Country Prince".

Buy some shit.
Posted by Gonzo Chicago at 9:19 AM No comments: 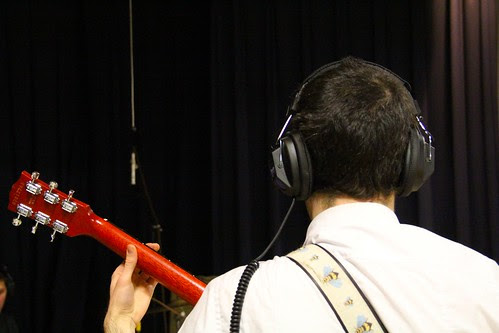 It's been three years since Paper Mice debuted their first full length "Paint It Pink". They've been a staple of our DIY scene for even longer, tearing up scuzzy basement and loft spaces, leaving the crowd a sweaty, grinning mess. We saw them make everybody go absolutely apeshit at the Mopery and have been in love ever since. Their songs are mostly minute-long bursts channeling The Minutemen that are over before you realize you were just crowd-surfing. Consistently spectacular live, we've been awaiting some new songs for a while, and they don't disappoint.

"The Funny Papers", due out in March, was recorded by Grayson Elliot Taylor, who has recorded Twista amongst others. It shares stories of madness in the world. "Banking Up The Wrong Tree" tells of Bank of America trying to foreclose a home of a couple...who didn't even have a mortgage with Bank of America. "Angry Meal", a tale of that woman who assaulted a Mcdonalds drive-thru employee. "Cannon Fodder" brings the story of rapper Rico Todriquez Wright, who shot a man and then wrapped about it in a song entitled "Hitting Licks for a Living". He's now in jail for the next 20 years.

Classically trained singer and guitarist Dave Reminick teaches music theory at Columbia. Drummer John Carroll teaches music to elementary school children where this very record was being recorded. There's no shortage of technical prowess in these tracks. The best part of seeing Paper Mice live is grinning at how the hell they stay so tight and energetic while banging out such insane songs.

We've seen some these new ones live, even filmed some of them, and hearing them come to life in the studio, we can safely say this is one high on our list of anticipated records of 2012. When I asked the band what the title meant, John Carrol told us it was "A play on words on the comical nature of the stories we tell in the lyrics. Another pun attempt. We almost called it "Pun's Not Dead!"

You won't have to wait too long to hear a sampling of this new record. We'll have an album preview video up in the next month or so. 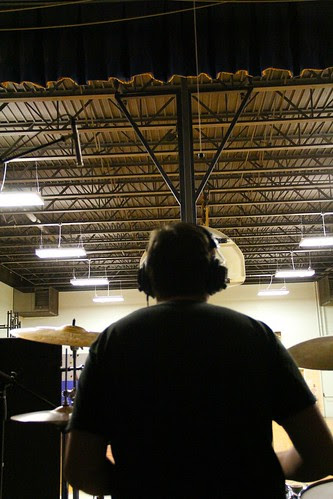 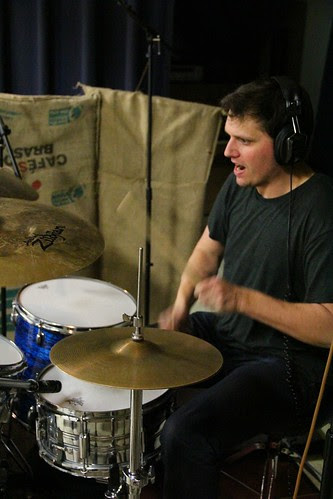 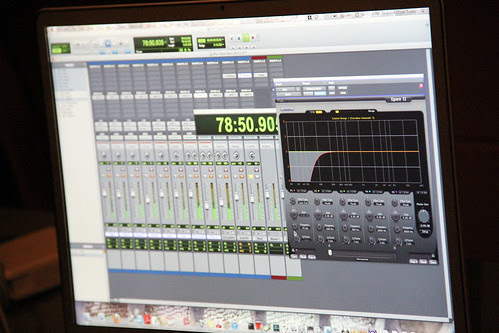 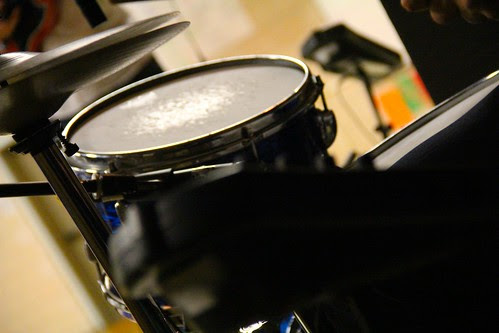 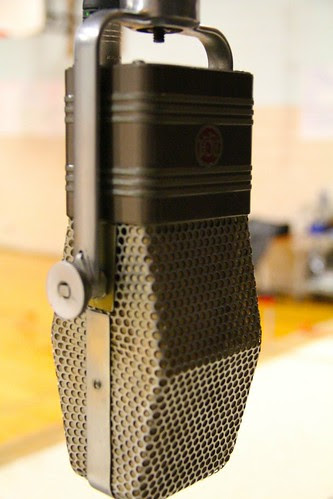 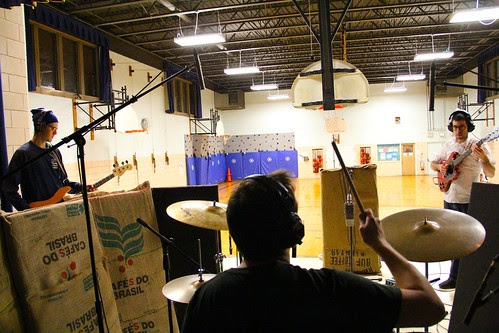 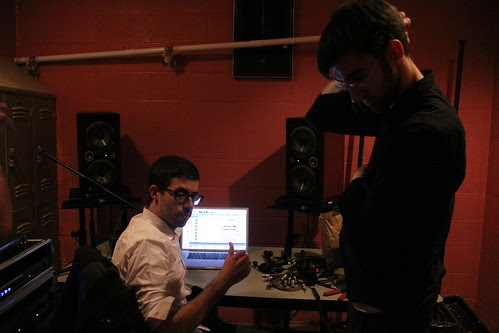 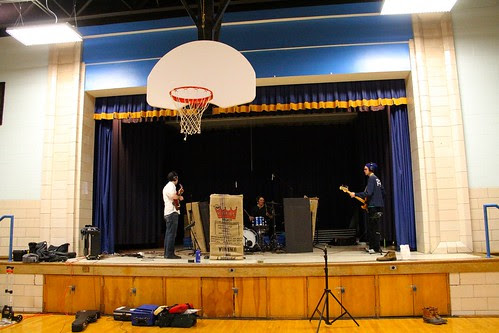 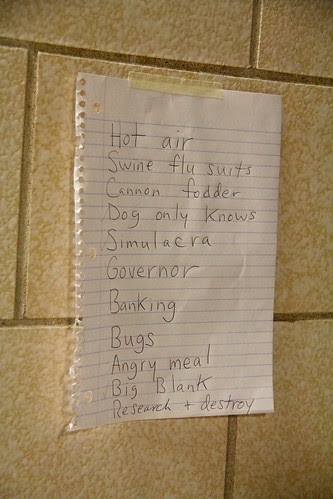 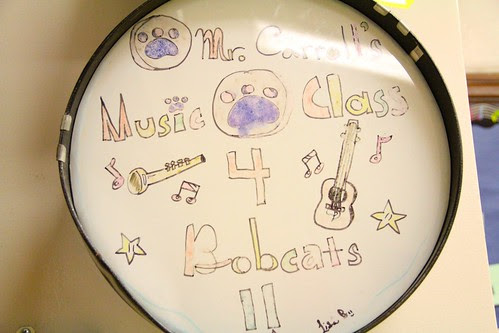 Chicago based MINES have been around a long time. They've been tearing up DIY spots for years, and it seems they're finally getting some overdue recognition. It started as a solo project of Bill Satek in 2008, and aside from a singular lineup change, it's members have remained consistent. With current backing by members of Tiger Hatchery, Wyoming, and Battleship, and now with Ben Billington on second drum duty, we're hoping we hear a lot more in the future. Be on the look out. This was filmed at The Empty Bottle's first show of 2012.
Posted by Gonzo Chicago at 12:12 PM No comments:

Happy Dog Gallery hosted one of the many end of the world parties on New Year's Eve 2011. Chicago's own MINES and a reunited SNACKS took the stage (floor) and made us all try to forget (or forever remember) what was either best or worst year of our lives.

I entered the place flu-ridden, hoping to Baby New Year Jesus it actually started at 10 like they said. It didn't, so I sipped on a cider that Battleship gave me, slowly, wincing with each tiny gulp.

I left after the ball dropped and both bands were finished, but I'm pretty sure more than just Rotten Milk ended up dj'ing and/or playing, which may or may not have included DJ's Mac Hines and Andicaine, and/or performances by The North, and I Love You.

Looking forward to a great year.
Posted by Gonzo Chicago at 9:14 PM No comments: