Ah, Bitchpork 3.  Three full days of the hottest conditions known to any DIY show.  The police came on day two due to an influx of people on the patio, so they closed it down on that second day.  Temperatures reached above 100 degrees.  We had a giant bucket filled with beer each day, sticking in a rather nasty corner by the catbox.  How we survived seeing every band, every day, without any permanent injury, I'm still not quite sure.

The building will never be replicated, largely due to Mortville's insane and maniacal art installations.  Treasure Town's art frenzy via Nick Fisher and others.  The amount of shows we saw there is staggering.  It's a shame it ended senselessly, due to NATO and not in a "normal" way, like a show being busted, or them just closing the damn thing.  However, it had a run that lasted longer than most any DIY space I've ever heard of.  It should be celebrated, and surely will be remembered long after.

The final Treasure Town show is tonight.  The lineup is secret until you show up.  8PM.  Bring as much dough as you can part with.

The above video is from Warhammer 48K's reunion during Bitchpork 3.  A sweltering, insane close to day one of the festival.  Enjoy, and see you tonight.
Posted by Gonzo Chicago at 12:18 PM No comments:

Young Man brought a hefty crowd for a Tuesday night at Lincoln Hall.  As I walked the crowd, I was surprised by the energy of it all.  Sadly, ninety percent of these people missed the huge sound of Mines and Catacombz emanating from the beautiful space, but what can you do?   The room filled like clockwork when the band, led by Colin Caulfield, gave a surprisingly rowdy performance.  It had been a while since I had seen them. Fresh off tour, and a feature in Rolling Stone, who wouldn't be having fun? "Volume 1" is out now on French Kiss Records, and we'd suggest you pick it up. These aren't just simple, sparse pop songs by a lonely singer songwriter.   There's something more to it that you should discover for yourself.
Posted by Gonzo Chicago at 9:31 AM No comments:

BivTCHPORK.   Spread throughout the city in multiple venues.  Some of this information is surely to change.  We probably won't update this particular page with spaces for each day, and such.  If you really even give half a shit, you'll know how to find what's what.   They're looking for spaces + volunteers to help.  Help them.  E-mail : bporkproductions@gmail.com.  DO NOT send an e-mail asking if you can play.  It's full!  It's in two weeks!  Just help e-mails, dingus!  xoxo.


Posted by Gonzo Chicago at 5:30 PM No comments:


We spent the last 4 days in New York City!  The night after playing Europa, our old chaps in Future of the Left did two "secret" shows. One at Saint Vitus, the other, Generation Records. Both were fun and full of snarky comments, Mclusky cuts, old and new songs. The Saint Vitus set was particularly potent. A great week, considering we are, well, based in Chicago, and didn't even expect to see these fuckers. The four piece slays. If they come, it's in your best interest to go. More video from this show will be coming up. Stick around. Thanks, New York.

I would like to extend a giant, slobbery thank you to all that attended the first annual Chicago Sonic Coalition project.  To say that it went well is an understatement.  Windy City Rock did a great recap, even though they sadly missed two of the best bands of the night.

There is a literal ton of media coming on this one, folks.  Video, photos, sound recordings.  How it all went so smoothly is a testament to our scene's cohesive, supportive nature, and it was definitely a highlight of the five years I've spent in Chicago.

Also, "we" just won "Best Music Scene Documentarian" in the Chicago Reader's Best of 2012 awards.  Critic's pick!  Thanks, Miles!  What an amazing few days.  On top of it, we're in NYC at the moment.  We saw, shot, and filmed Future of the Left play two secret shows.  Means Jeans at Cake Shop.  A great time.  Stay tuned folks.
Posted by Gonzo Chicago at 11:01 AM No comments:

Running are a band from Chicago.  A typical gig is around 13 minutes of noise that makes you wonder where everyone's balls went.  Unlike a lot of fake "I don't give a fuck" punk attitudes these days, Running are the real deal, and up the ante.  They don't have a website.  You won't find them on social media.  Yet, they're everywhere, at least to those lucky enough to be in Chicago.  This isn't a feigned choice, I'm convinced they just want to blow random people's minds.

Regulars of the dark corners of our DIY scene, we first caught them in the wee hours of the night at a now dead, but not forgotten place called The Mopery.  This is the shit that makes your jaded, wasted heart melt at 2AM, but you don't forget in the morning.  Dirty bass lines. Harsh vocal swapping.  Add in a guitar that may as well be some sort of maniacal bloodthirsty eagle, a drummer that plays like he's only got one more set until he dies, and you have Running.  There are some serious wacky pop-hooks and evil melody buried deep beneath the surface here.  After some ultra harsh tape releases, a split with Loose Dudes, and a release on Permanent Records, they now have a new LP called Asshole Savant out on Captcha.  It's probably the cleanest shit they'll put out, and comes with a flexi b-side that concludes the below track. BUY IT.
Posted by Gonzo Chicago at 10:20 AM No comments:

Summer is here!  Here's some great belated footage from the spectacular Hideout Block Party in 2011.  Andrew Bird closed out the fest after Mavis Staples with a thrilling performance.   Here's a touching speech by Bird, as he leads into a great rendition of "Nervous Tic Motion".  Always one of the highlights of summer, this year's fest is combined with the A/V Club's efforts.  Be there.  We'll try and get some of Mavis Staples' set up soon.  Xo
Posted by Gonzo Chicago at 10:59 AM No comments: 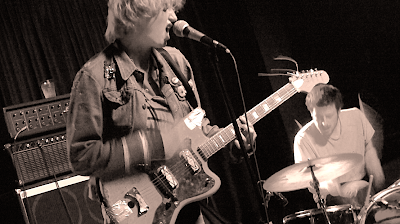 When it comes to posting tracks, we're more apt to go see the bands live and record the whole damn thing.  If a band we really like sends us some new shit nobodies heard, you bet your ass we're going to premiere a track from it.

The Funs are a two-piece from Chicago. They jump back and forth between drumming and guitar duties, the songs taking different forms with each switch.  It's reverb heavy.  We realize this isn't a new concept, but having seen this band a good 10 times, this is sure as hell refreshing.

We were first tipped off to them by Magic Ian's ranting about how good they were.  This is a track off their upcoming, yet-to-be-titled new record, recorded by Cooper Crain.  We have the whole damn thing, and rest assured, it's all this great, so be on the look out.  You can catch them live at "Nowheresville" on Saturday with Mines, Nude Sunrise, and White Fang!  Be there.

Posted by Gonzo Chicago at 2:26 PM No comments:


This is a live, impromptu piano performance.  Charles Joseph Smith is a performance artist, classical pianist, and dance artist based in Chicago.  He has many stage names, including the most formidable "Mr. Forefinger".

Charles makes albums and sells them for $5, mostly at DIY shows, does impromptu dance performances with bands, both as a solo performance in itself, and to "enhance" his favorite bands.  He is everywhere.  Find him and support his work.

This was a unscheduled performance inspired by "The Land Line" magazine, which was having a benefit for their issue's release that night at $ituationz.  Fun fact, a house member, Sarah Marie Coogan's origami artwork is right on top of that piano.  Enjoy!
Posted by Gonzo Chicago at 6:05 PM No comments: