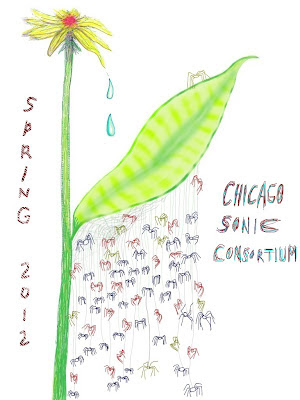 Chicago : Tonight at Treasure Town, we draw 60+ musicians names from a hat. Those names will form over 14 new bands. Those new bands, they have 2 months to create a set of new music, to be played for you.

Welcome to the Chicago Sonic Consortium. This is not a new concept, as Cleveland had their "Lottery League", Milwaukee has "All Messed Up", and so forth, but with the amount of talent in this city, how could we not put this together? Come hang out at Treasure Town, as Mines, Mystreater, and Magic Ian will be playing for you as well. 9PM. Bring a few bucks for these fine folks, as gas is really quite stupid expensive. Be there!

Posted by Gonzo Chicago at 8:31 AM No comments:

New Heavy Times jams! The dancing bearded fellow screamed and yelled into the night. Surely you could hear him in the previously filmed Paper Mice song. He had his fun, and we had ours. Filmed in a very cramped "Situations" basement. Movement was difficult, but this one sounds so good, we had to share. Enjoy!
Posted by Gonzo Chicago at 5:57 PM No comments:

I'll share a secret with you : I hate waiting. When my beloved Logan Theatre announced it would be closing for remodeling, my first thought was "Yes! Those terrible seats will finally be gone!" followed shortly by a feeling of dread. Would tickets jump too high? Would the feeling of my favorite spot in the city be lost? I don't know about most of you, but I loved the old Logan, terrible seats, sticky floors, and all. Yes, I focus the attention on this blog to dirty warehouses and basements that you might liken to the smell of the old Logan, but I felt like it was my theater. You could walk or stumble in any night of the week and get a decent spot to sit. I almost liked the game of finding that one decent seat in a row that didn't make you feel like you got the hell beat out of you when you left.

So began a brutal 6 months of waiting. Walking by, shaking my head every time. Cursing that blasted sign. Murmuring something about real-buttered popcorn in each passing. I'm happy to announce it's reopened, beautiful, and still reasonably priced. Tickets will cost you $7, $6.50 for students. It's a bigger jump than anyone wants, but let's be realistic. A night out here is still going to be much, much cheaper than a soulless trip to the other jumboplex. Matinees are even cheaper at $5.50! The concession stand is still inexpensive comparably, with the largest sized popcorn under the $4 mark...and yes, they kept the real buttered popcorn. Soda is even less. There's pretzels, too. Another inclusion is the addition of a full bar. I forgot to check drink prices.

As far as layout, the whole thing is beautifully done, and there are some MASSIVE changes. Marble walls, lighting, old remnants of the past like the movie reels and phone booths. They opened up a whole other room for the concession and bar area, including a multi-room lounge area. The place was packed, with every showing selling out, and there were still some seats in the lounge unfilled. This can only bode well for when the initial buzz wears off and it calms down a little. The concession area was jam-packed the whole time, probably due to the $1 popcorn and drink special. You really can't fault them on the long lines, due to the insane demand. It'll be rare that every showing sells out completely on a normal night of operation. Even so, with an absolutely jammed concession area, I was able to wander up to the bar and get the attention of a bartender within 10 seconds. Attentive, and friendly staff are going to go a long way here.

The rooms themselves are prettier, and I can safely say the seats are really comfortable. There's good spacing in rows, the sound and video was great, and the temperature remained cool, if not a bit chilly for a t-shirt. Not complaining on that one, it'll be welcome as it gets hotter.

I had my phone open, and was quickly shut down by theater staff, which I actually smiled and nodded at. Nobody wants to be that guy. The one minor gripe I had with the whole experience was the organization of lines for entry to each theater. Either it wasn't staggered well enough, or it was the sheer amount of people who just, really, don't know how to form a straight line, but it was kind of a mess in the general area. I wouldn't fret about it, it's likely to be a non issue on a normal business day.

That said, a stellar, enjoyable, and extremely eye-pleasing opening for a gem of the city. It was great to see The Goonies on the big screen. 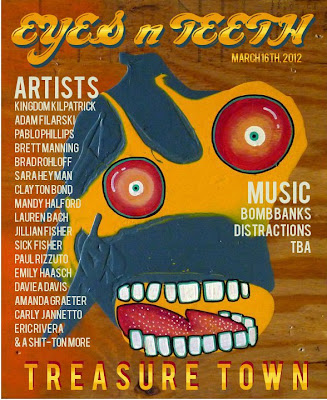 Treasure Town, part of our 3-floor mecca of everything loud and beautiful, is having another art show. Those who have attended in the past know they're in for a treat. Tonight, a slew of spectacular artists will transform the spot yet again into God-knows-what. The beauty of these arts shows is that you never really know what you're in store for until you walk through those doors.

The last one housed a Double Dagger show in the basement, but upstairs you walked a hexagon filled wonderland, complete with insane circular centerpiece.

The musical stylings of Bomb Banks, Distractions, and Mayor Daley will add a little noise to the evening.

We rarely do event listings, only for special occasions, and this is that. These are always great, so we suggest you come. 9PM. Bring a donation for the bands, artists, and money to buy some cool shit. If you don't know where this is, and really can't find it, ask a mug.
Posted by Gonzo Chicago at 6:10 AM 3 comments:

In 2011, a friend of mine held an art show in Chicago. It also housed some of our favorite local bands like Piss Piss Piss, Moan Moan Moan, and Lechuguillas. Smack dab in the middle of a 7 band line-up was Ed Schrader's Music Beat. Being unfamiliar, and properly sauced by the time these two took the stage, I really had no idea what I was in store for. He lit the drum, covered by a Double Dagger t-shirt, and they were off. It blew me away. They went from Joy Division to Jay Reatard in mere seconds.

The power in that evil gaze made me laugh, but this was no joke. I was laughing because it was so fucking spectacular. Wondering if my booze-addled brain was just wasted enough to trick itself into thinking this was, indeed, THAT good, I trekked to the Empty Bottle to see them again. As I hope you can see in this video, I was not mistaken. Some of the most powerful sounds and moments to come from a simple two piece, since, well, anything I can ever remember.

Ed lives in Baltimore, and is a comedian, journalist, talk-show host, and part of the city's "Wham City" collective. He's joined by Devlin Rice on bass, and I hope it stays that way.

"Jazz Mind" is out now on Load Records. Buy it!
Posted by Gonzo Chicago at 11:04 AM No comments:

Paper Mice have long been a staple of the Chicago DIY scene. I'll never forget the first time I saw them in the Mopery, a now defunct warehouse spot in Logan Square. The precision of these songs rests in the players, two of them being music teachers. It's a level of skill brought into what are basically sharp punk rock songs that has won over countless crowds over the years. This is a new song off "The Funny Papers", due in the spring of 2012. Enjoy!
Posted by Gonzo Chicago at 11:12 AM No comments:

New Chicago band alert! Members of The Felix Culpa, Stay Ahead Of The Weather, Red Knife Lottery and Tornavalanche played their second ever Chicago show at Beat Kitchen the other night. This one's called "Gossip Choir" and it's off the loud-ass debut E.P. called Televandalism. Play it loud. Enjoy!
Posted by Gonzo Chicago at 6:08 PM No comments:

The ever-changing Islands landscape came to Lincoln Hall for a vastly different kind of show than what we've seen in the past. This time around, it was mostly a down-tempo, piano laden endeavor to highlight their excellent new LP "A Sleep and A Forgetting". Here's "Hallways" with a brief intro snippet of "This Is Not a Song". Filmed at Lincoln Hall.

(buy the record) islands
Posted by Gonzo Chicago at 10:34 AM No comments:

Hopefully this didn't cause any terrible flashbacks for any of those swell veterans hanging out that night. The first time I saw Magic Milk was when Turbo Fruits played a now defunct basement space bathed in deep red light. A young kid got up to the mic in a leather jacket, slicked back hair, and giant sunglasses. He sort of looked like a glam era reject with a hint of Fonzie. It ended up being a highlight of the night, simple garage rock tunes sang with soul, a harmonica, and tubes of paper confetti. The band was Magic Milk., and they've since gone through a slew of drummers, now with Maggie Laleman of Tiny Manatee behind the kit. She's a good fit here, and I hope she sticks around.

Magic Milk's songs are simple, and there's a heavy display of frontman showmanship here from singer Kenneth Alden, but it's not empty shenanigans. There's a heart and soul in these songs, and they're played with a serious demeanor, despite some ridiculousness. Sure, there's confetti, a chant, and he's got sweatpants on! Sweatpants! How he went from that first day, to this, I'll never know. You could easily laugh it off as a schtick band if you weren't dancing your ass off at the end of the night, completely fucking sold on the whole thing. Oh, and whoever threw that giant condom filled pinata at us at 3:28, you suck. 'Twas a hell of a shot, though. Second camera by the wonderful Mark Ciarleglio.
Posted by Gonzo Chicago at 12:05 PM No comments: