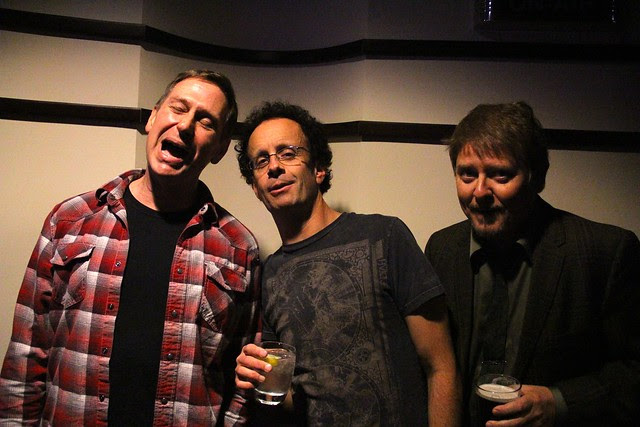 Just as the Sun-Times hinted at, Dave Foley surprised Chicago tonight by joining the cast of "Two Kids One Hall" alongside Scott Thompson and Kevin Mcdonald.

Stanhope would have laughed his ass off.

Foley plays the Improv this weekend, while Thompson and Mcdonald continue their five show run at the beautiful Mayne Stage. 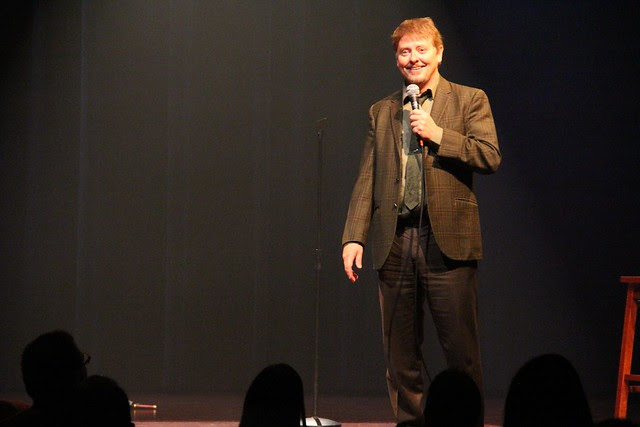 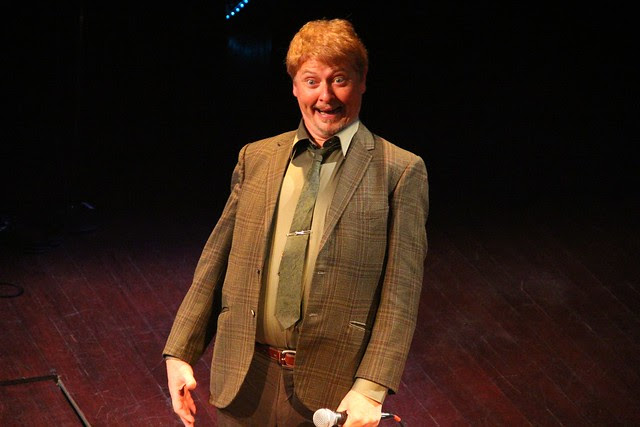 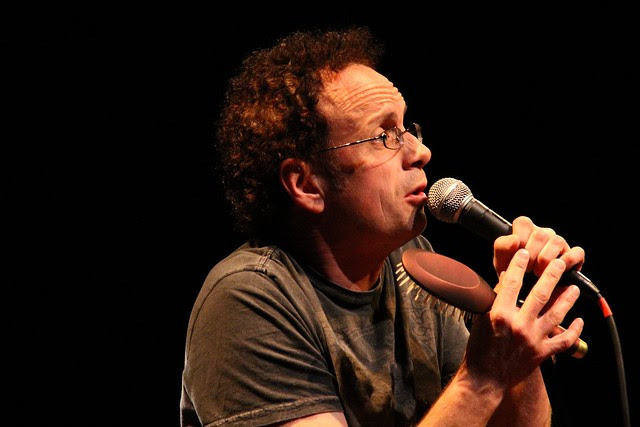 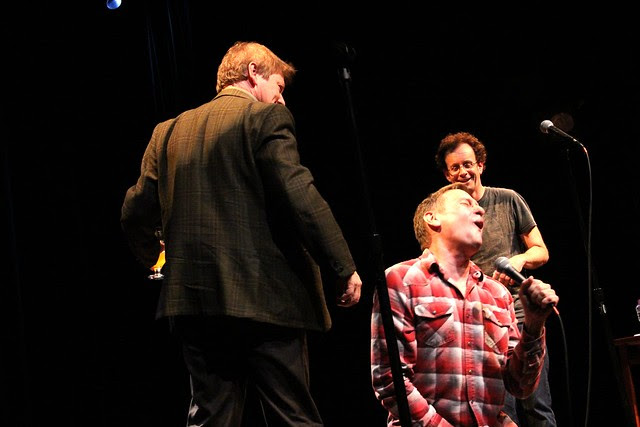 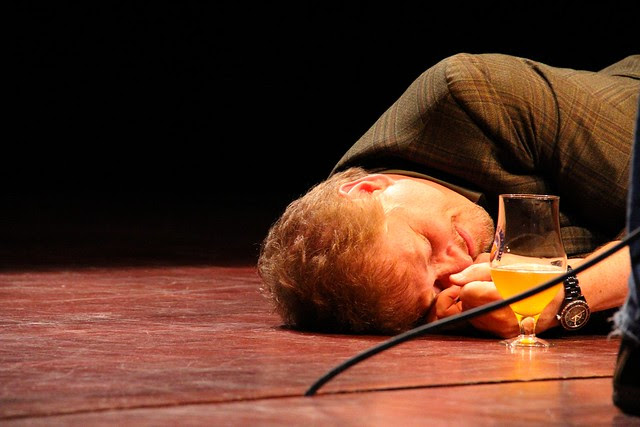 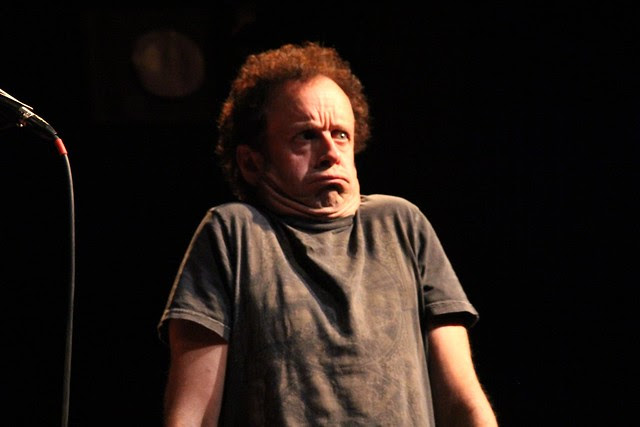 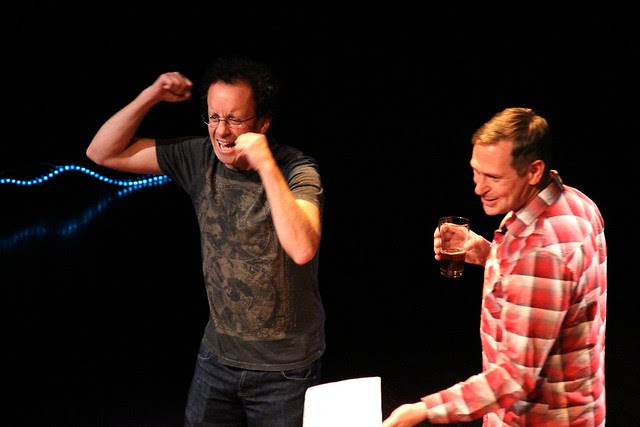 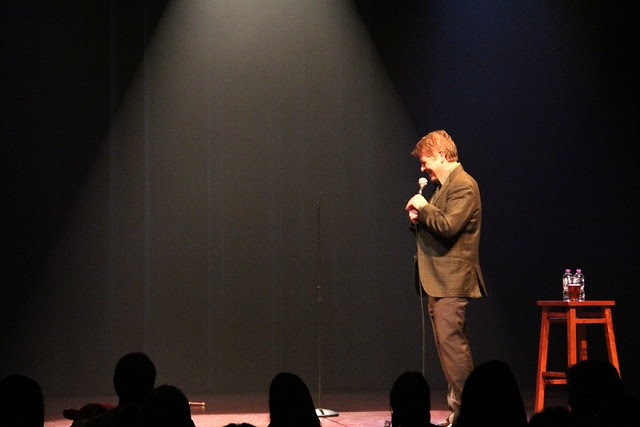 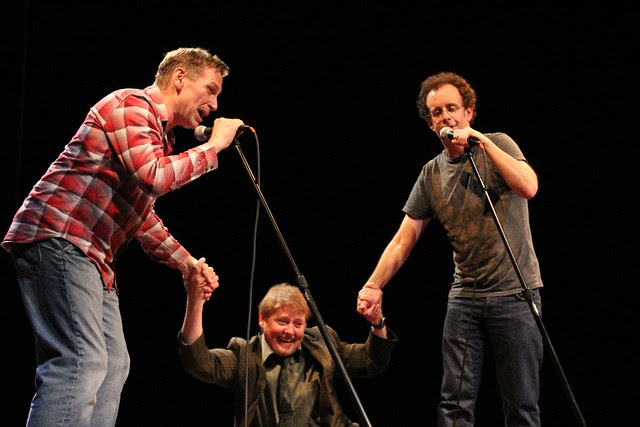 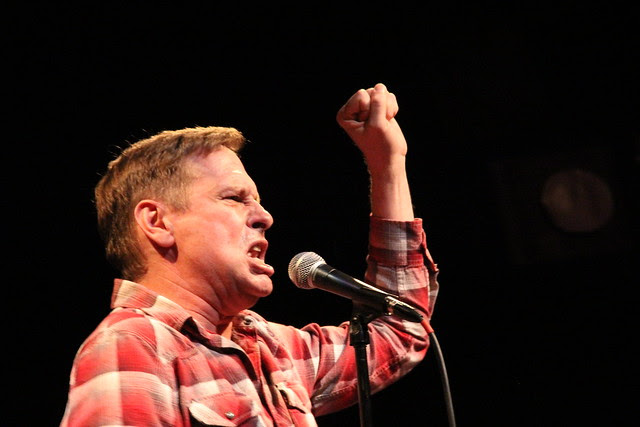 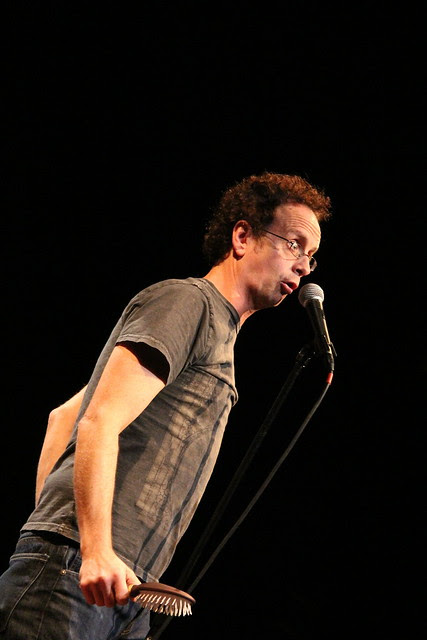 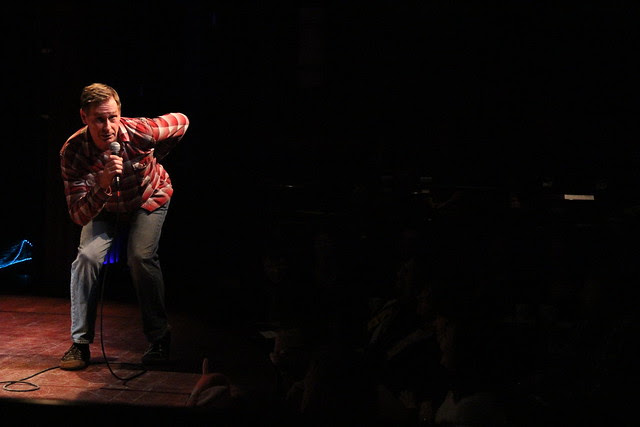 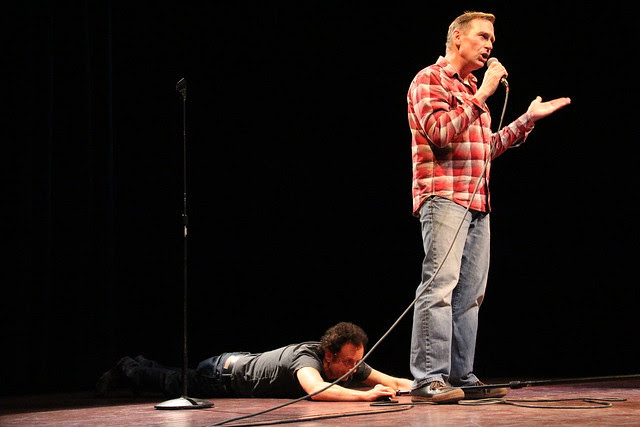 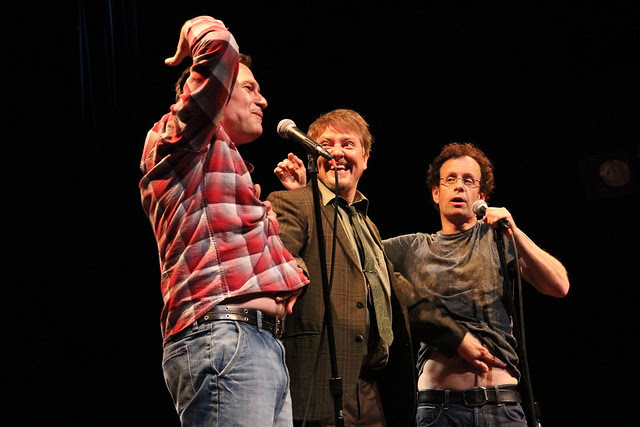 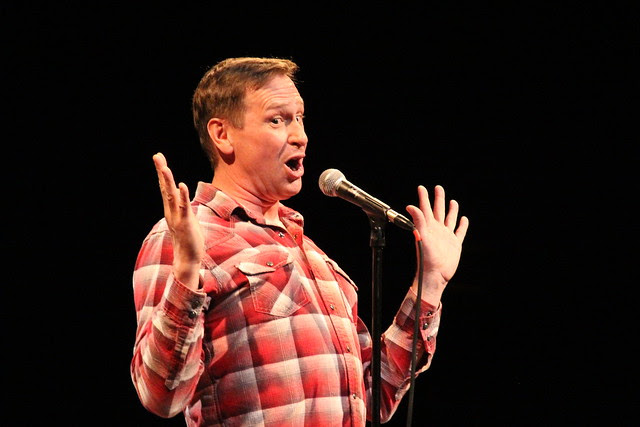 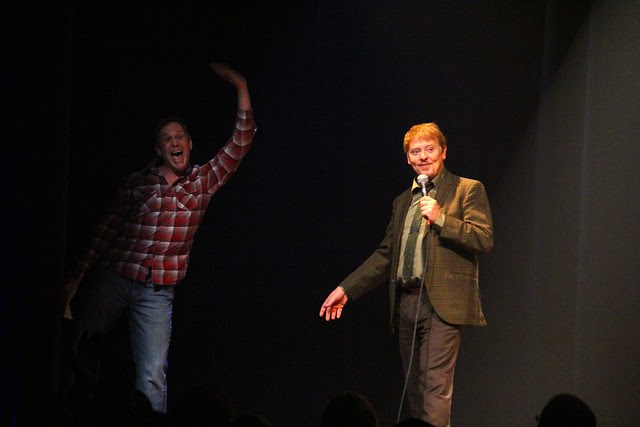 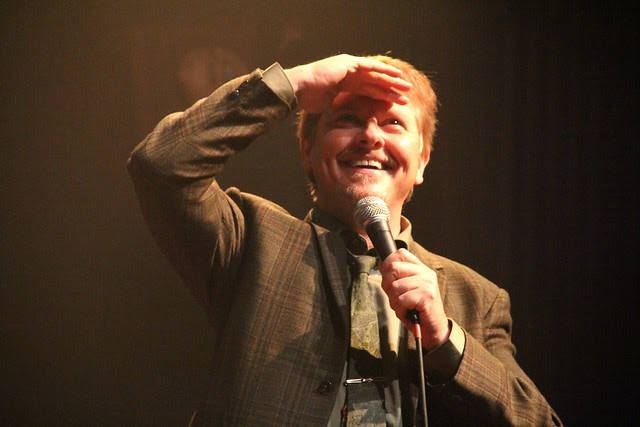 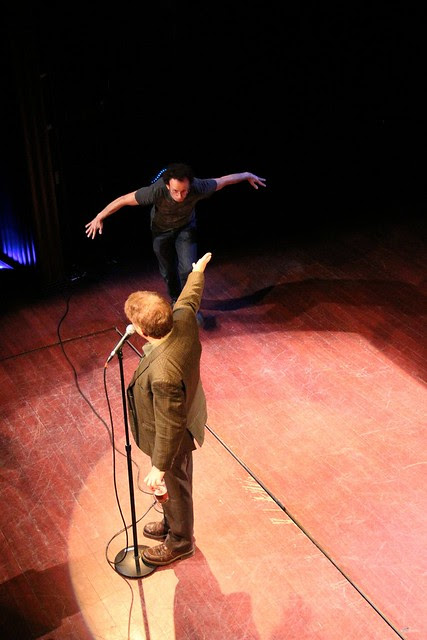 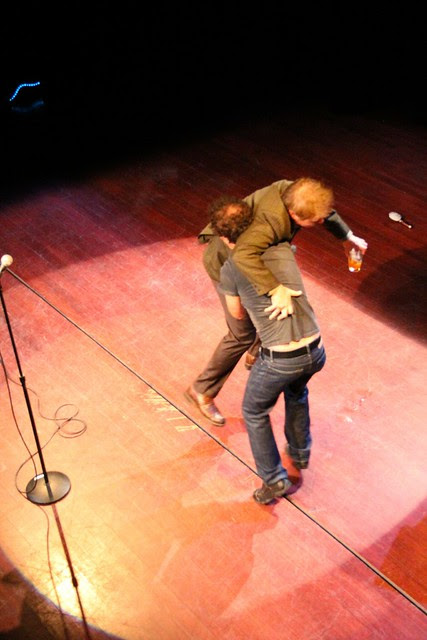 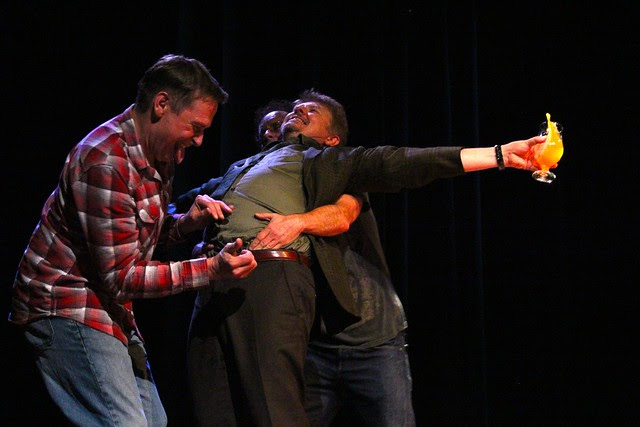 After a sweaty show at the Empty Bottle, Ty Segall opted to play in the sprawling art wonderland that is Treasure Town. Here we have him slinking into the crowd, playing some Sabbath with Timmy Vulgar, and generally making everyone lose their shit. Do we see White Francis crowd surfing for a moment there? Human Eye, Mikal Cronin, and Heavy Times opened. Sadly, the memory card in our sound recorder got corrupted, or the vocals on this would be a lot stronger. Still sounds and looks pretty slick, considering it's just onboard sound. "Goodbye Bread" out now on Drag City. Enjoy!
Posted by Gonzo Chicago at 8:18 AM No comments:

A few years back, we were taking shots of whiskey at the Mopery, vibing to some dirty noise-rock, when a guy with an ultra-sweet beard came up and handed us a very home-made CD-R wrapped in yellow construction paper. "Take this, we're called Cartright...we're playing soon", he said. So we shoved it in our back pocket, gobbled down the rest of that whiskey, and as these fellows started to play, our eyes went wide and our faces went blank. It was phenomenal. It was unlike anything we had ever heard in that dark, dirty warehouse. Like a bucket of water to the face...more proof that our DIY scene wasn't just a bunch of doped up kids banging on sheets of metal. The thing is, their songs often involve driving, razor-sharp breakdowns with them all whooping and yelling their hearts out in unison, only to switch to a song like this that makes you want to hug your grandmother. It stuck with us ever since. We still jam that album often.

Texas natives Cartright came back, this time to Mortville, with eleven other acts to send off our boys in Lechuguillas. This one puts a lump in our throats. Enjoy :

Posted by Gonzo Chicago at 5:03 PM No comments:

Tonight, Consequence of Sound welcomes Nathan Christ's Echotone to Empty Bottle , with a special performance by the amazing Paper Mice! The event starts at 6:30, with Paper Mice playing shortly after. There will also be a premiere of the new White Mystery video! Admission is $5.

Also, the amazing Double Dagger are breaking up! Sad news, but they're playing a second show, more their style. Your favorite DIY warehouse! The second night in Chicago, with a reunited Black Ladies, Hume, and more. It's in the basement of the Mortville building, and there's also a hexagon themed art show in the middle level, Treasure Town. The art show starts a bit earlier, and the show begins at 11PM.

It's a great day to be in Chicago. Come on out!

Posted by Gonzo Chicago at 12:29 PM No comments:

We love Chicago's local businesses. With Occupy Chicago, and the Occupy movement in general picking up steam via rabid twitter accounts, and a National Day of Action coming up this Saturday, we thought we'd reach out to some great local companies. See if they'd like to donate some needed items to the cause. We contacted Metropolis Coffee, and our e-mail was briskly passed on to David Retzer, who responded almost immediately, saying the company would like to donate some to-go boxes of coffee, even though their monthly donation quota was full.

It's this kind of selfless mentality that will lead real change.

Join us, in a National Day of Action :

On October 15th people from all over the world will take to the streets and squares.

From America to Asia, from Africa to Europe, people are rising up to claim their rights and demand a true democracy. Now it is time for all of us to join in a global non violent protest.

The ruling powers work for the benefit of just a few, ignoring the will of the vast majority and the human and environmental price we all have to pay. This intolerable situation must end.

United in one voice, we will let politicians, and the financial elites they serve, know it is up to us, the people, to decide our future. We are not goods in the hands of politicians and bankers who do not represent us.

On October 15th, we will meet on the streets to initiate the global change we want. We will peacefully demonstrate, talk and organize until we make it happen.

There is a main march at 7PM on Saturday, saying they will leave from Jackson & Lasalle at 7pm to Michigan and Congress.

Occupy for change. Join us. Kurt Vile has a new track called 'Life's a Beach"! The "So Outta Reach" 6-song EP will be available on 12″ and digital formats on November 8.


On top of that, this little gem has been hanging under the covers for a while.

Back on April 1st, Kurt Vile played an in-store at good ol' Reckless Records. It was a precursor to a show at the Subterranean. Like a gentle fall breeze, he waded through new and old with ease. Yes! We love being corny! Enjoy!

Buy his stuff from Matador! :

Posted by Gonzo Chicago at 5:38 PM No comments:

Tonight, at 8pm, we release 2/3 of Lechuguillas into the Texas wild. Without them, the Mopery would not have existed, nor would a huge chunk of what has happened in the last few years. A staple of the Chicago underground scene for years, they were at the height of their power, with a new record to be released...tonight. They probably would have gotten boring or went all fucking prog-rock on us anyway. Chicago has a history of saying goodbye in style, as you may know. If you want a current status of the DIY scene here, well...the line-up is :

Lechuguillas release party for the new record Insurrection of an Erection

A night for the ages. Bring a cooler.

Cartwright are playing, too! Solid. Don't miss it :


P.S. they're touring on their way, and will be running a record label in Texas. EAT MEAT RECORDS
Posted by Gonzo Chicago at 11:10 PM 1 comment:

This weekend, WILD FLAG return to Chicago for a sold-out two night stint at The Empty Bottle, here's a PART 2 of sorts of that crazy Subterranean show in July. Channeling Patti Smith, Brownstein and her spectacular lady cohorts left everyone freaking out. Go see this band! Click this to watch Part 1.
Posted by Gonzo Chicago at 3:48 PM No comments: