Obits : Live at the Empty Bottle now up on WFMU-curated Free Music Archive... 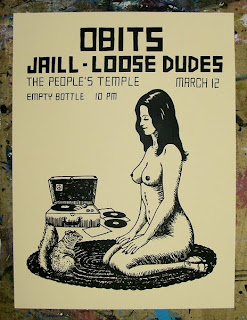 Our recording of Obits set at The Empty Bottle up on the FMA with five others, including that first Cake Shop show! :

Along with the word came the sound: the Cake Shop bootleg, attesting to the nascent band's greatness (and their full year spent gearing up for this show!) as it was passed around by fans online. it's a lo-fi document, but a cohesive Obits sound shines through: one with incredible live energy, drawing on a wide range of influences with wisdom and sparseness and a rhythm section to match. That recording soon reached the ears of the mighty Sub Pop label, for whom the Obits are currently two albums deep.

The Cake Shop recording is now one of six Obits live performances hosted here on the FMA, where the group has taken ownership over their "bootlegs" by actively adding new sets to the archive. In addition to sets curated by WFMU (Evan "Funk" Davies show in 2009, June 4th 2011 on Terre T's Cherry Blossom Clinic) and KEXP ("Put It In Writing", 5/16/2009), there are recent sets from Athens GA's Caledonia Lounge and Chicago's Empty Bottle. The latter two were recorded by local scene archivists whose websites yield many more gems: Southern Shelter (Athens GA) and Gonzo (Chicago).

For Obits on record, check out I Blame You (2009) and Moody, Standard And Poor (2011) at Sub Pop, who also co-released two 7"s ("One Cross Apiece b/w Put It In Writing " & "I Can't Lose" b/w "Military Madness") with Comedy Minus One. All of these releases are highly recommended."

Interesting article. Almost made it to NYC for that show. Did we mention how great the artwork on the newest record is? Damn. Really, though.
Posted by Gonzo Chicago at 12:05 PM

buy it on gigposters! http://www.gigposters.com/designer/93360_Ryan_Duggan.html